Long ago Muslim traders referred to Sri Lanka as ‘Serendib”, Arabic for ‘Island of Jewels’ and the basis of serendipity, the art of making happy and unexpected discoveries. This is how Sri Lanka felt, like a collection of small but beautiful surprises, held together in an island aptly shaped like the inside of your right hand. 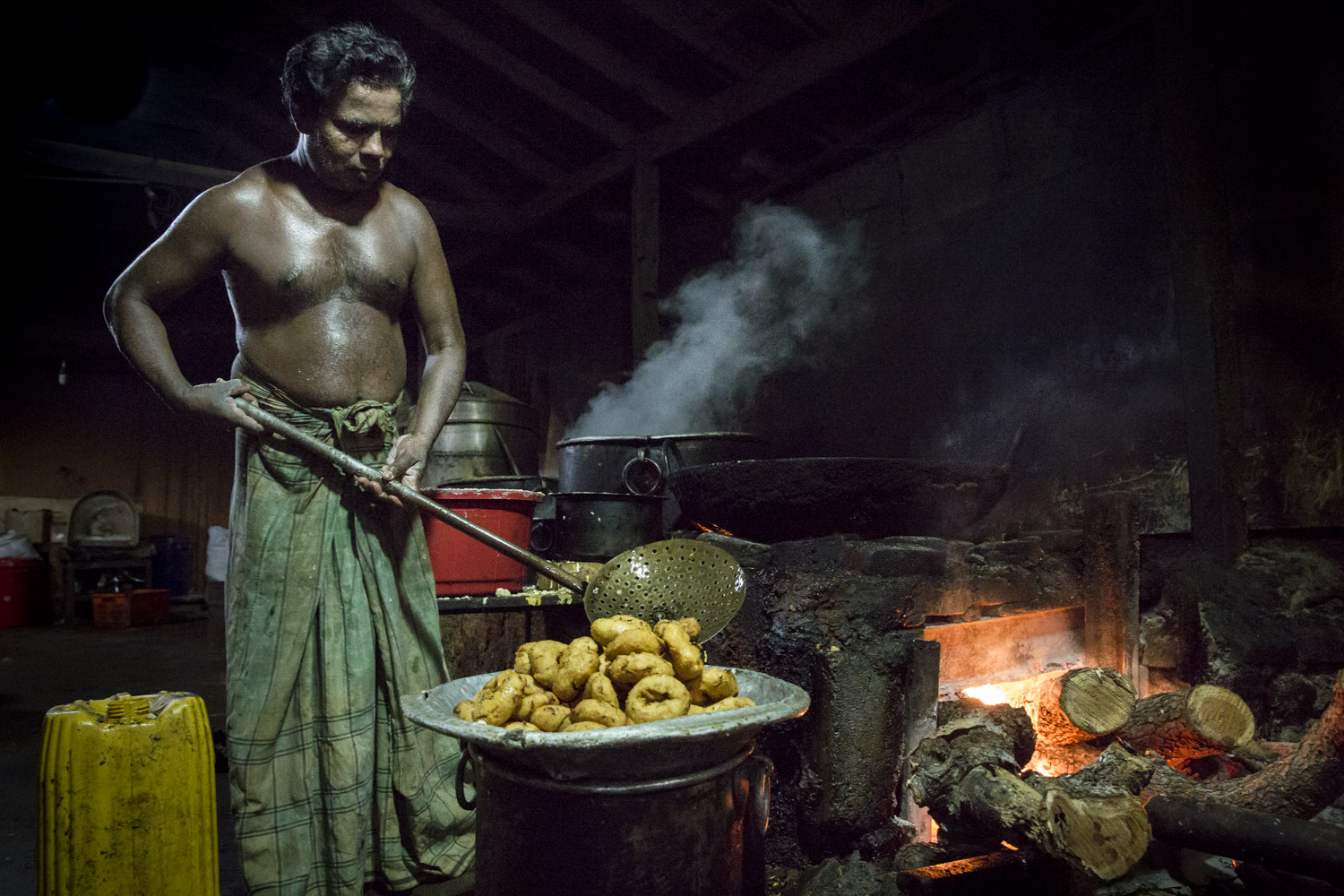 Tips: Stick to local eateries, they are considerably cheaper, tastier and more interesting than the tourist joints (veggies a safer bet than meat dishes and packed with flavour); get used to instant coffee if you don’t want to pay R50 for a cappuccino; AB De Villiers is a great conversation starter (he’s a much loved cricketer in Sri Lanka); visit a local barber in Colombo for cheap, sassy haircuts and equally cheap (not too sassy) neck massages; give Jaffna a fighting chance – its not so much a holiday destination as a travelling experience, packed with history of the civil war, exceptionally kind locals and a rawness you won’t find anywhere else in SL; hire a bicycle or scooter in Jaffna, best way to see everything

Transport: Iliad was an the most affordable and comfortable option, Cape Town to Colombo via Dubai, and there is a comfy and affordable overnight train from Colombo to Jaffna (go first class)

We arrived in Colombo at 4am, with swollen feet, grey skin and holes under our eyes. The first onslaught was the heat, unfathomable, indescribable heat, over forty soupy degrees and the sun had yet to rise. There must have been five thousand people standing outside the entrance, wrapped in colour and talking incredibly quickly. Sitting on the pavement to catch our breath we asked a taxi driver about the crowds. “Every Sri Lankan that arrives expects at least five friends and family to welcome them. The airport always looks like this”. His explanation lightened me. It felt as if they were there to welcome us too, smiling as we walked past, acknowledging our strangeness with kindness and warmth.

We spent our next two days in Colombo wondering aimlessly, showering every hour, catching the train to nowhere, growing accustomed to the heat, spice and local customs. One thing I cottoned onto quickly was the subtlety one must practice when being publicly affectionate. You never see couples kissing or even embracing but shows of affection are evident everywhere. Hand holding, whispering, shared laughter, lingering looks, a gentleman helping his lady onto the train and resting his hand on her back for the journey. In my mind these small signs of sensuality are as synonymous with Colombo as chilis and sun. 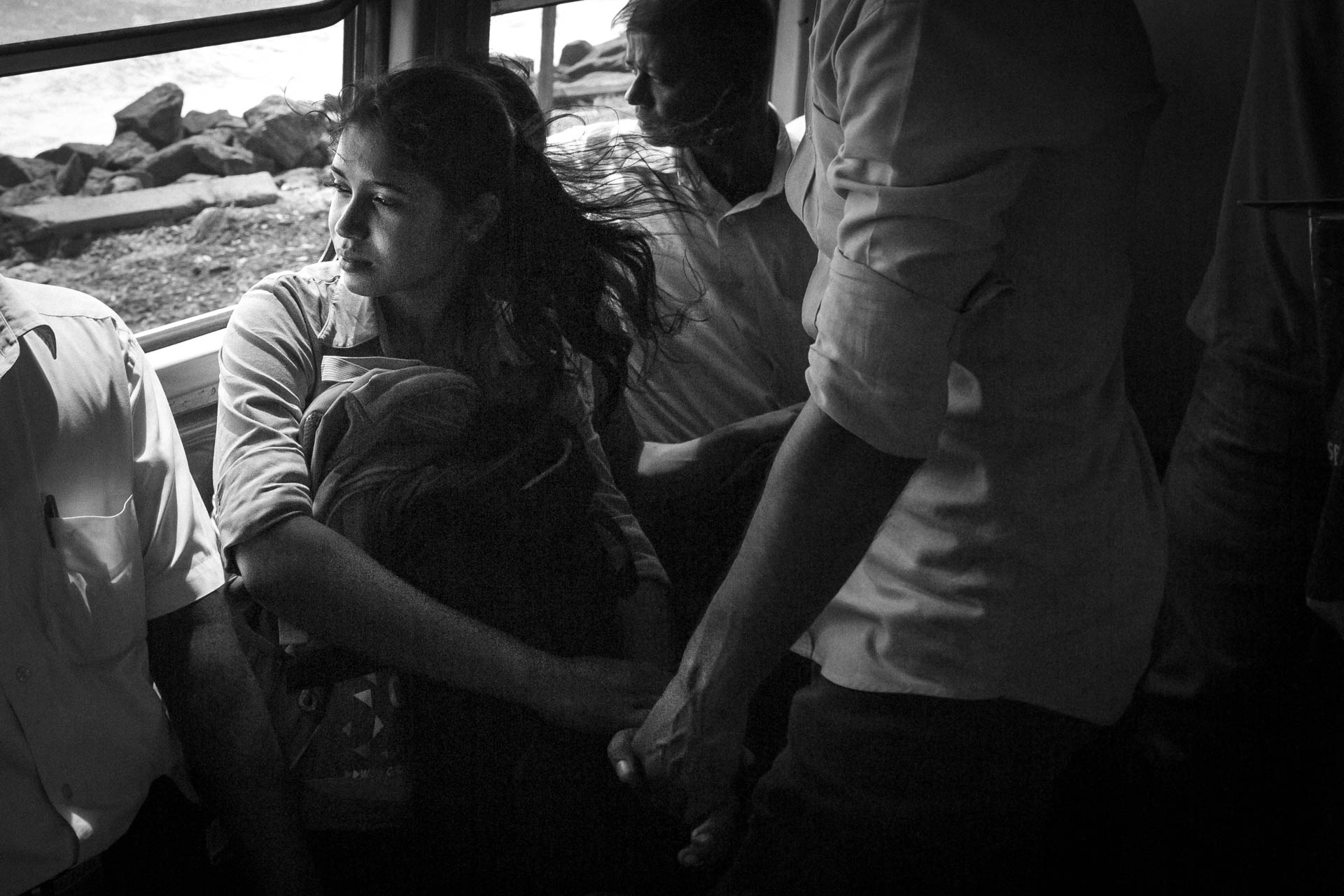 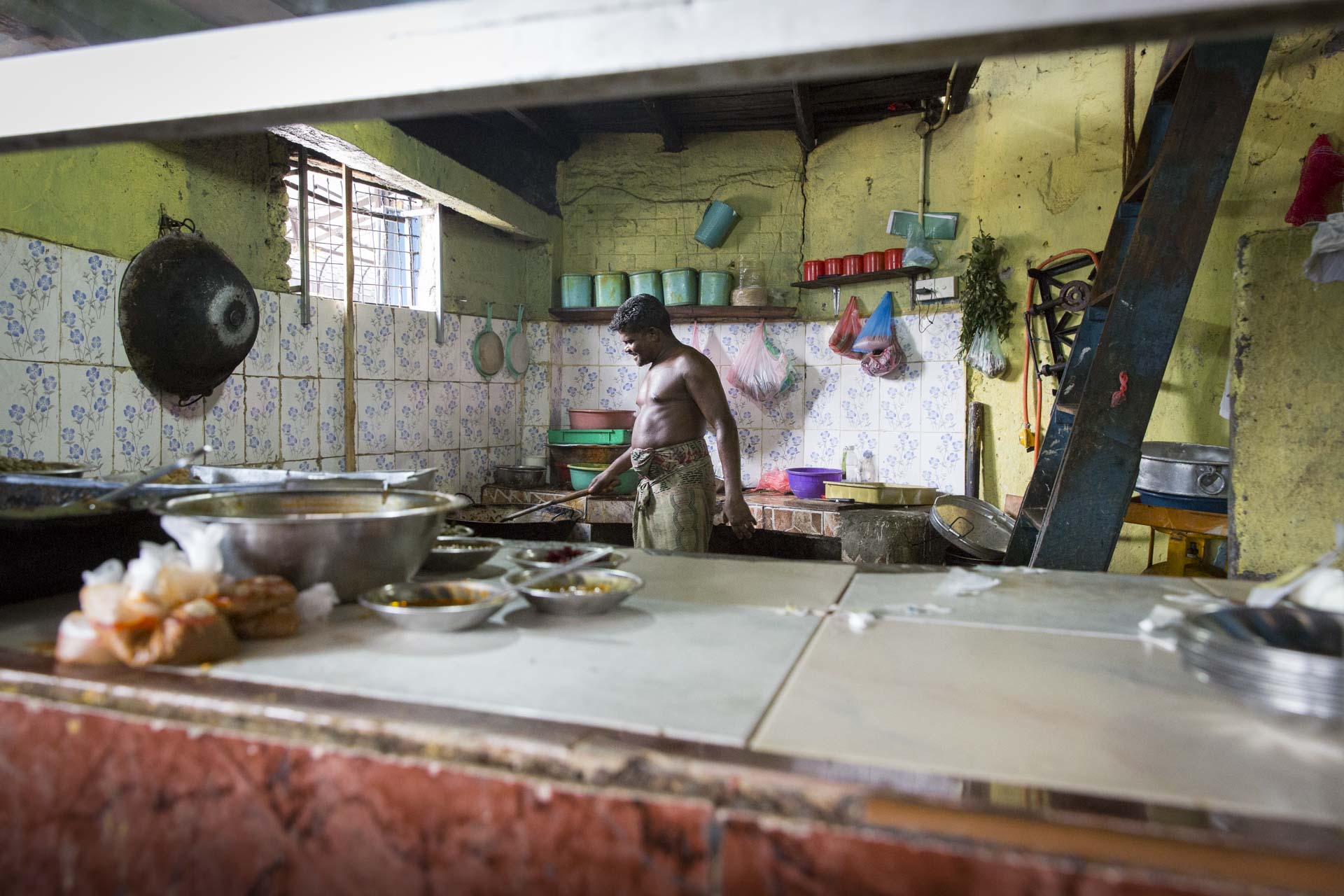 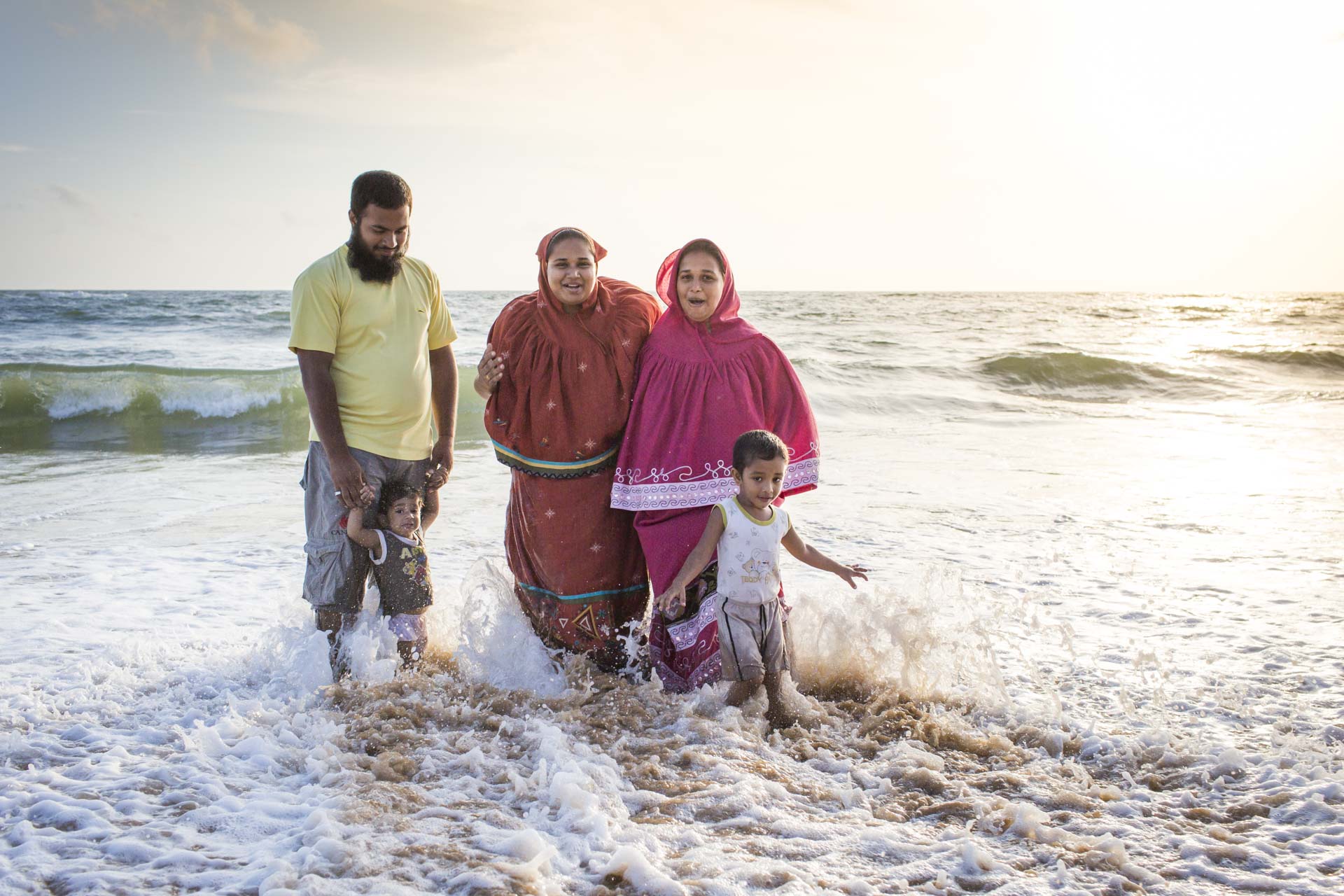 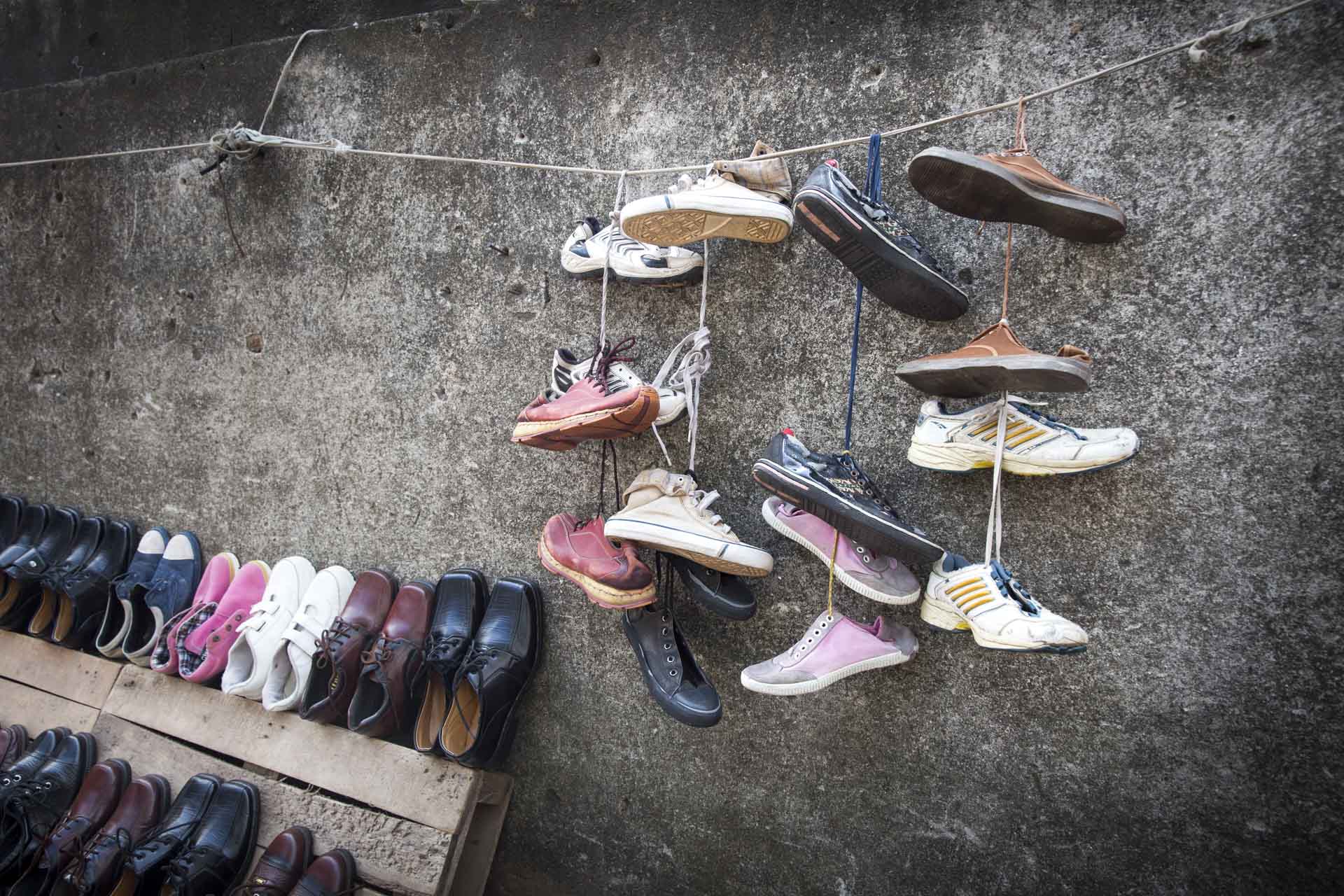 We hired bicycles for our five days in Jaffna but quickly realised they couldn’t be used between 10am and 3pm, so incredible was the heat. Even locals looks at us like loons when we wheeled laboriously past their shaded shops, sun feasting on our unaccustomed skin. Our first morning in town was tough. The streets were chaotic, main drag littered with hardware stores and countless different repair shops. Adverts for cement companies canvassed every second wall, alongside bullet riddled shells that were once family homes. 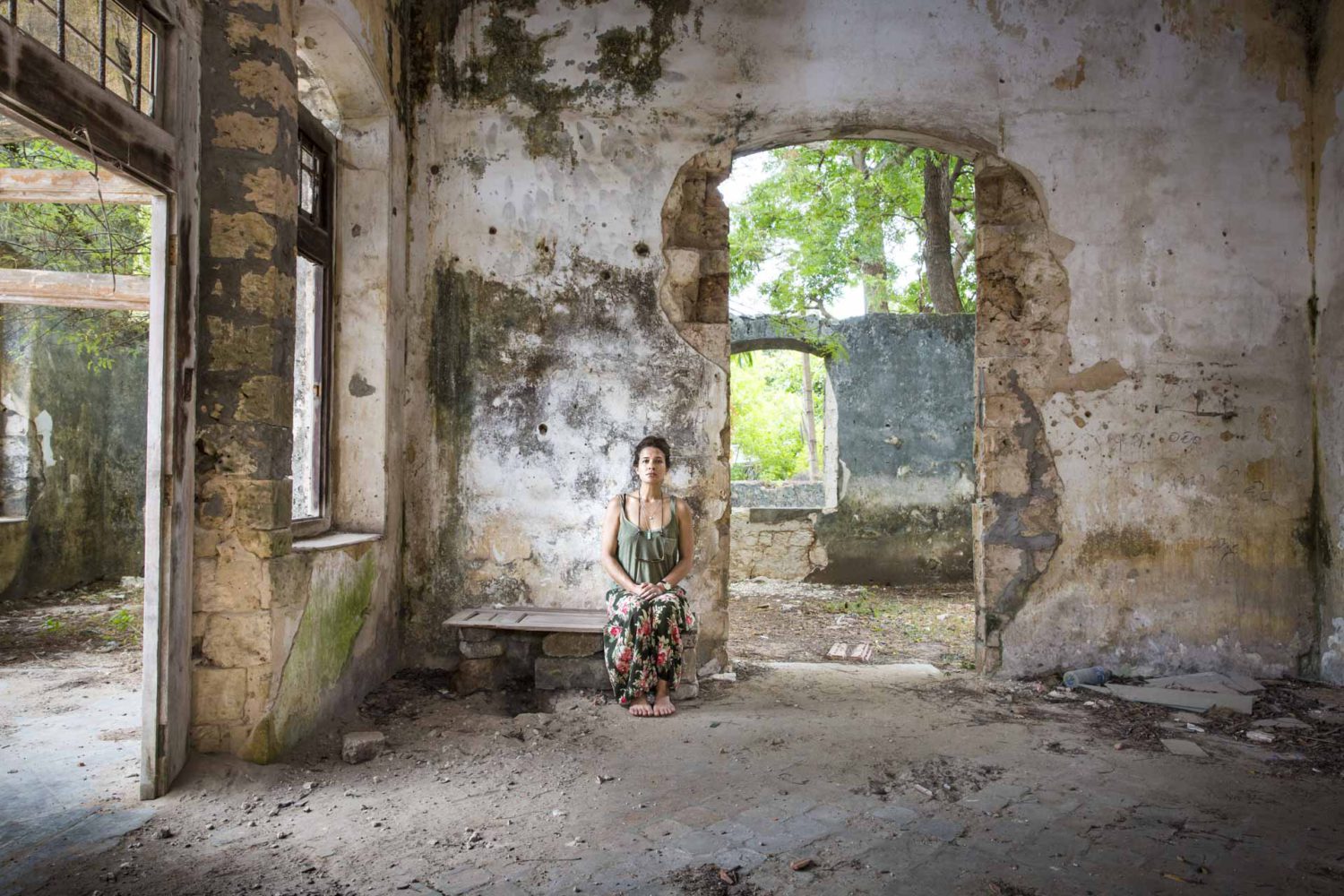 This was the first time that I got a physical sense of Sri Lanka’s civil war, a battle that started in 1983 with an insurgence against the government by the Liberation Tigers of Tamil Eelam (the LTTE, popularly referred to as the Tamil Tigers). For the next 26 years the LTTE fought to create an independent Tamil state in the north and east of the island but were eventually defeated by Sri Lankan armed forces in May 2009. It’s estimated that between 80 000 and 100 000 people died, Tamils and Singhalese alike, and weighing these losses its impossible to pinpoint the “bad guy”. 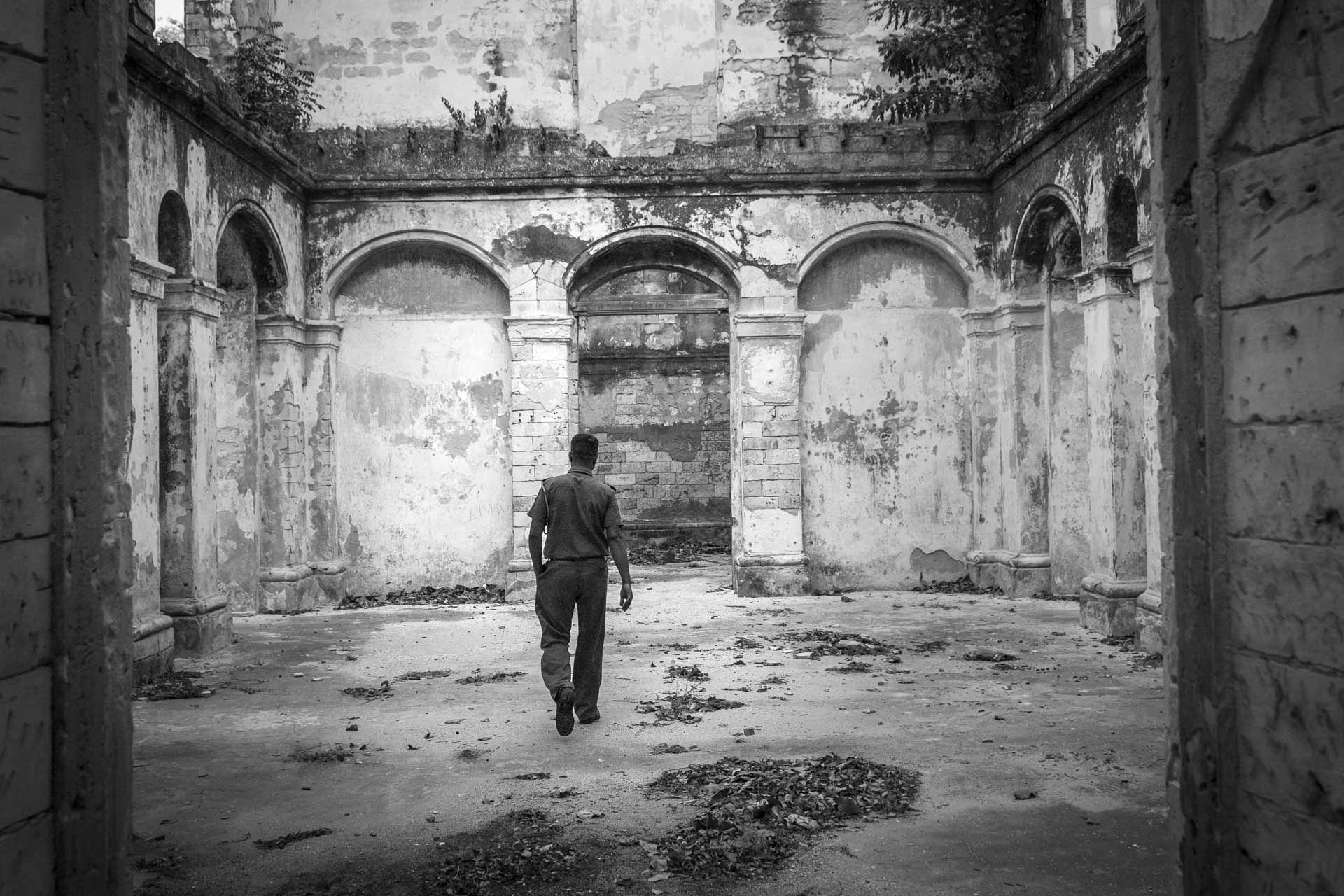 Meeting Sri Lankans one would not guess that they are recovering from war. They are kind and forthright, smiling towards foreigners and always up for a chat. This is especially true in Jaffna, the hardest hit province and yet home to an open and friendly people. I can’t help but compare it to Mozambique, where the men are hard-hitting, disinclined to show foreigners any sign of joy or curiosity. They wear hardship on their sleeves, whereas Sri Lankans seem to keep their suffering tucked away. Although hidden, the scars remain, all too evident when you start to probe. I only made this mistake once, asking a young Tamil man his thoughts on the upcoming parliamentary election and Mahinda Rajapaksa’s attempt to re-enter office. His face dropped instantly, his eyes darkened. “He’s a very bad man,” was all he said and realising my insensitivity, I quickly changed the subject (Rajapaksa – then president – ended the war with a cruel, albeit successful, killing spree, taking tends of thousands of Tamil lives).

On that first morning in Jaffna, peddling hungry through the heat and a broken city still under repair, I felt an awful sense of sadness. I’m not sure what I imagined when I pictured Jaffna. “Sri Lanka’s for photos, Jaffna is for photojournalism,” a photographer friend had told me but here now I couldn’t figure out what photojournalism meant. In a place so visibly damaged, with locals reluctant to talk about loss, what role did I play, this foreigner strolling in, with no real connection to the war or any legitimate right to ask questions. I could take pictures of the bullet holes, contrast them to small kids smiling, the new generation living in an old and battered city. But those would just be pictures, with no explanation, no questions asked and certainly none answered. I felt shallow and restless that first day, wanting nothing more than make a quick exit.

It was our guesthouse Raj who perked me up with his barrage of questions and infallible positivity. We never discussed his feelings towards the war, but through his determination to stay in Jaffna and be part of its new fabric, I started to fall in love with the town, this cultural capital so full of everyday stories. 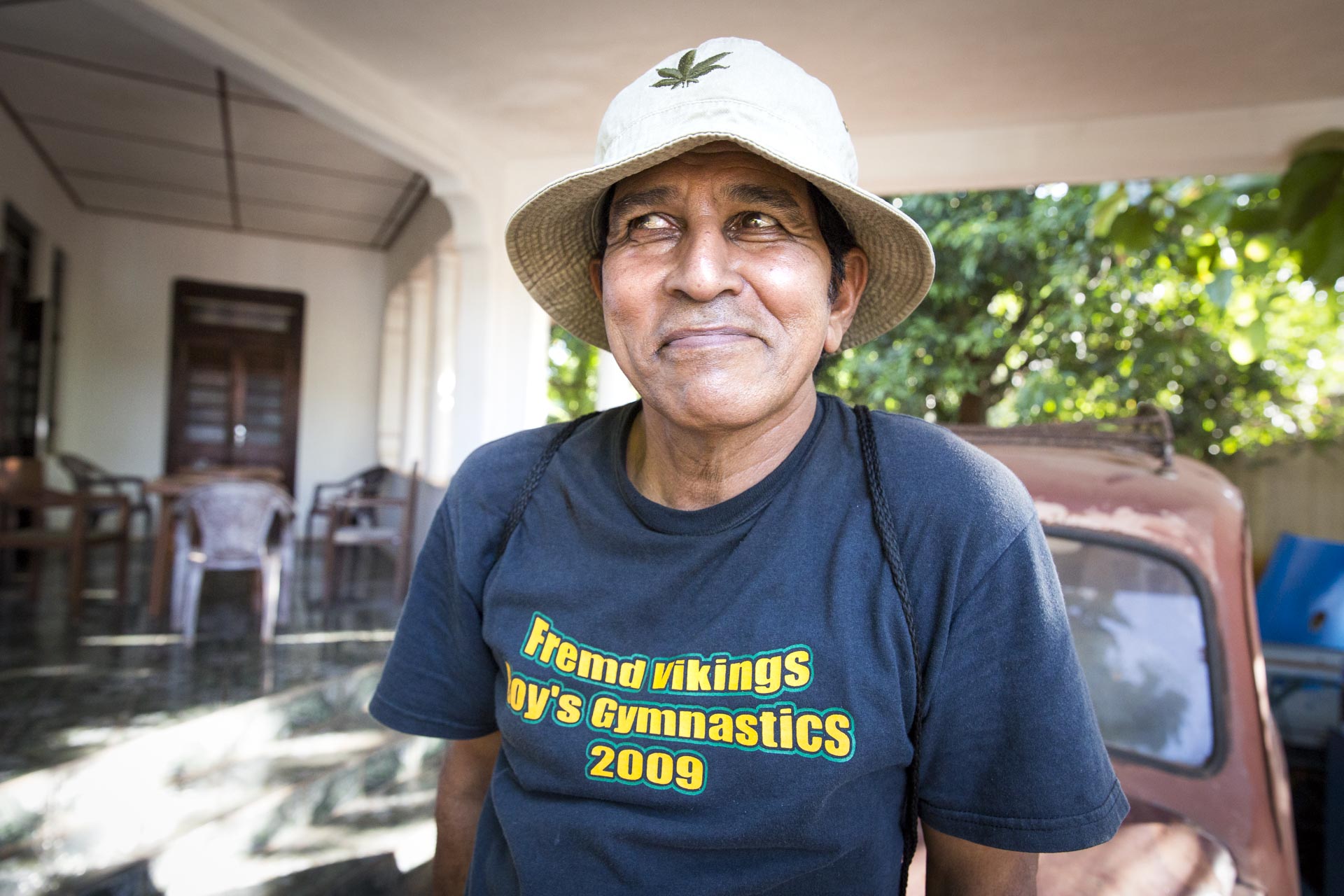 We started waking up early, pre-sunrise, to cycle the streets before heat shimmer set in. We visited Jaffna’s biggest and most decorated Hindu temple, leaving shoes and Oli’s shirt at the door, the same as everyone else. Although I practice no religion, I am always awed by the expression – and unwavering existence – of faith. The soft murmurs of prayer, the sweet smell of incense, the coming together of young and old, men and women; it creates an appreciation for the unseen and the unproven, and although my rational mind might argue, my gut can be quiet and enjoy it. 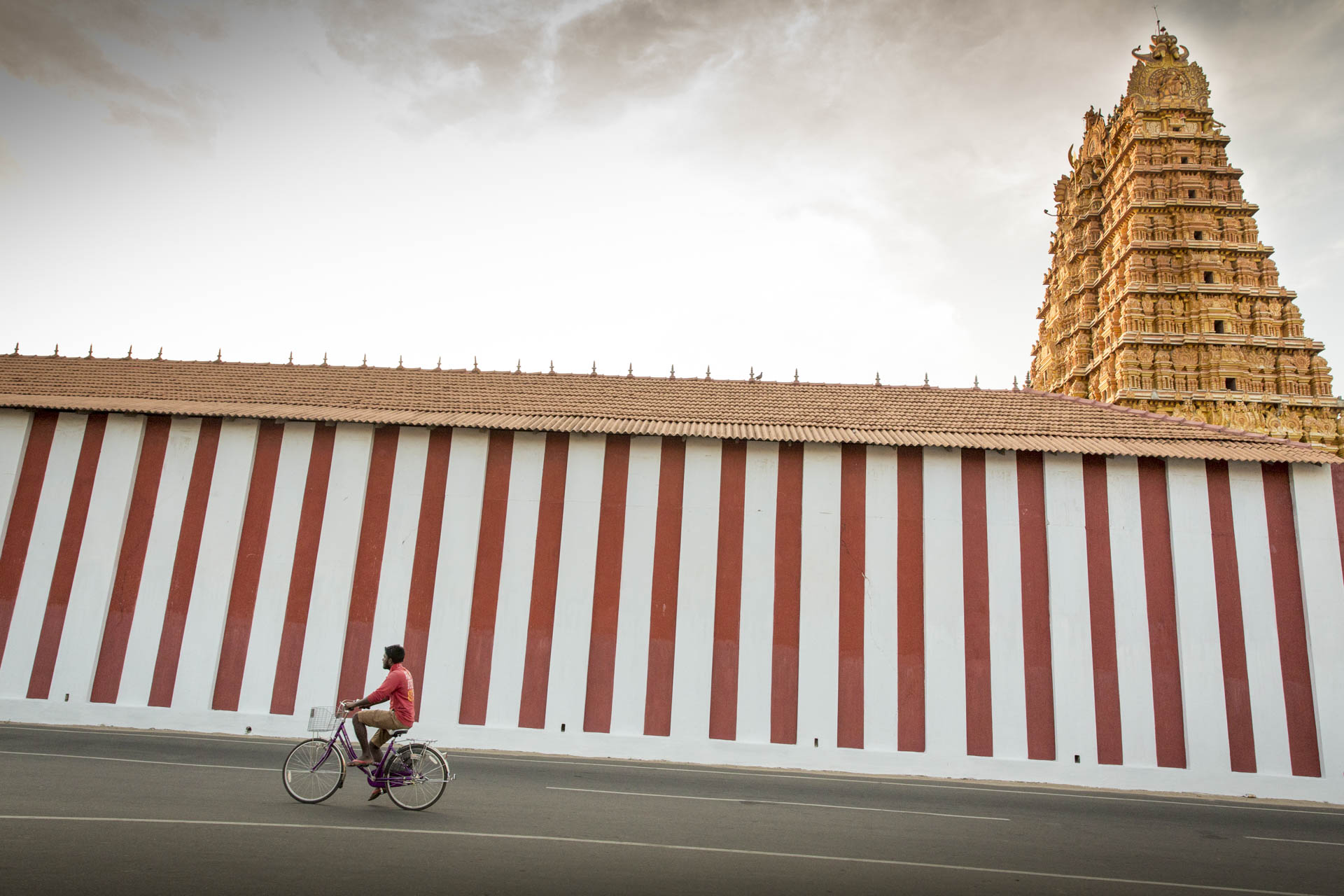 We spent an afternoon at an old fort, built by the Portuguese in the 16th century and claimed by the Dutch when they colonised Sri Lanka in1640. The British took it from the Dutch, and enforced numerous divide and conquer tactics that fuelled Tamil-Singhalese tensions and ultimately civil war. It felt as if this 500 year history – changes in power, battles fought, victories and losses, pride and suffering – remained captured in the sandstone walls of this sturdy brown structure. And when you looked at the walls a little closer, a much older story unfolded. Sea shell fossils embedded many of the fort’s building blocks, ancient sandstone used by 16th century conquerers to build what would eventually become a Tamil stronghold. Bullet holes dotted the stone and some punctured the seashells, recent history overlaying ancient, story upon story close enough to touch. 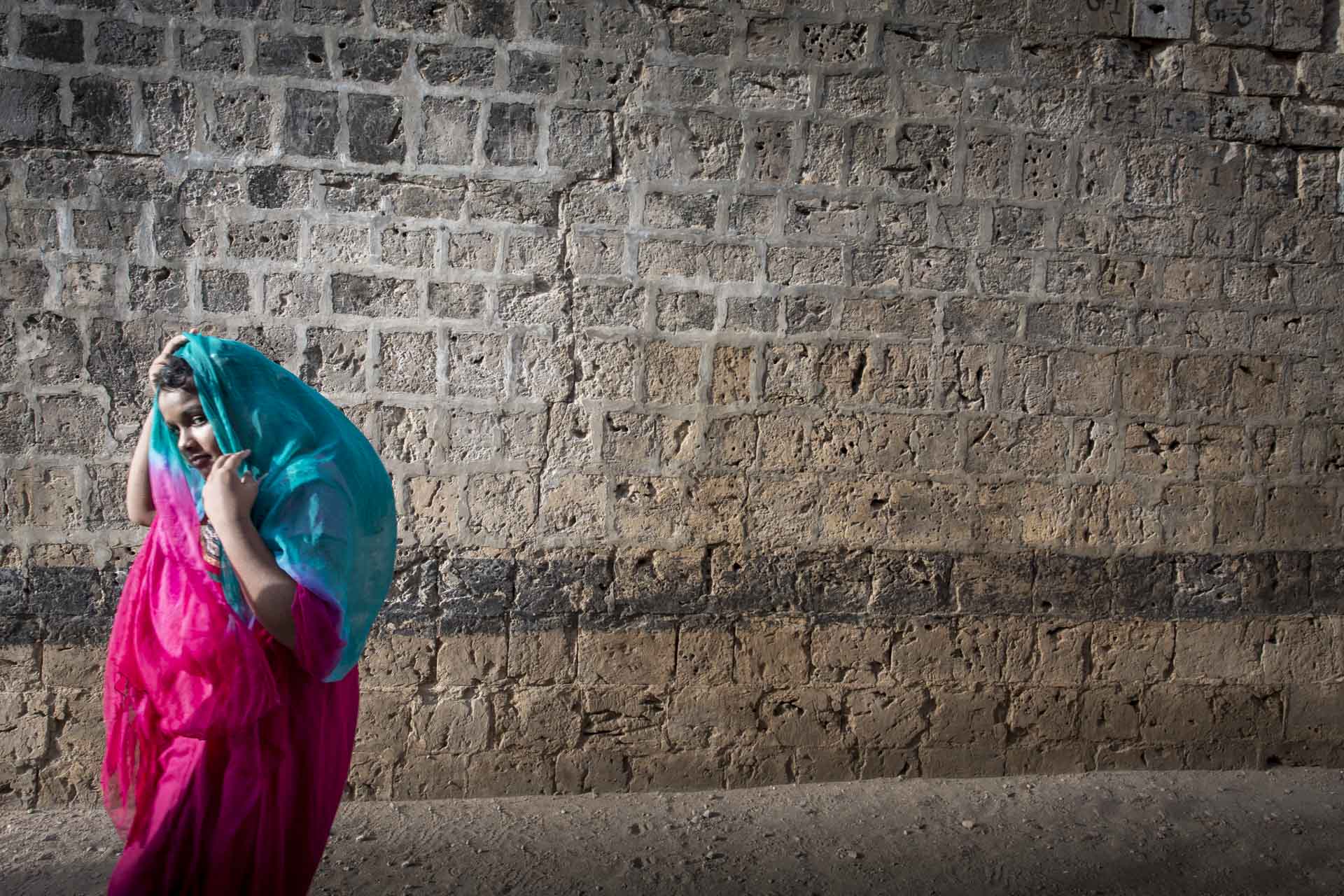 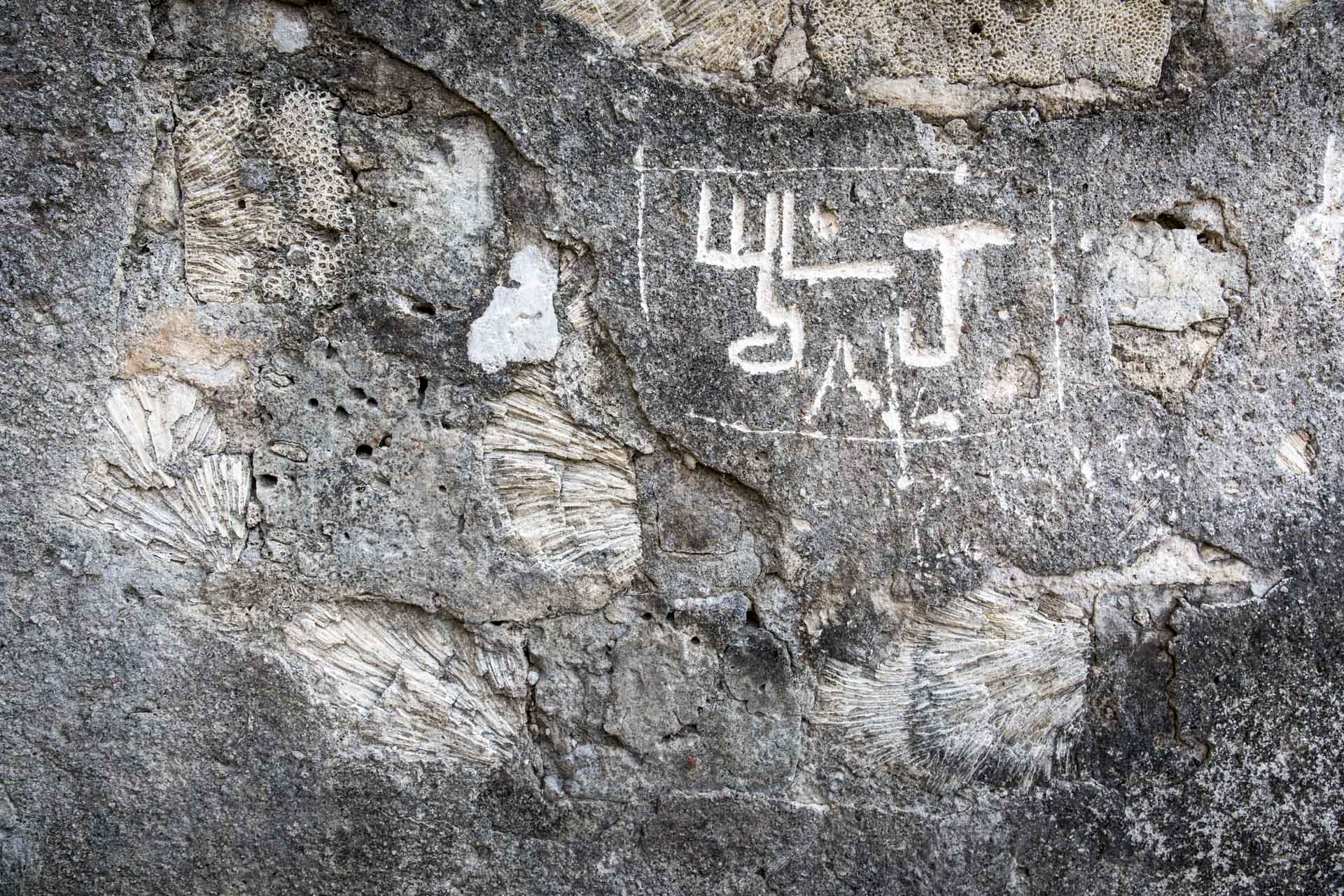 As the sun dipped, the wind swept in and we cycled home along the backstreets, hugging the coast and the sad side of Jaffna. A greater number of houses stood empty and bullet-ridden, the men and women didn’t smile so readily. There were no cement adverts, no hardware shops, no building sites or men on roofs. This was Jaffna as it had been in war, with no human or architectural signs of rebuilding. 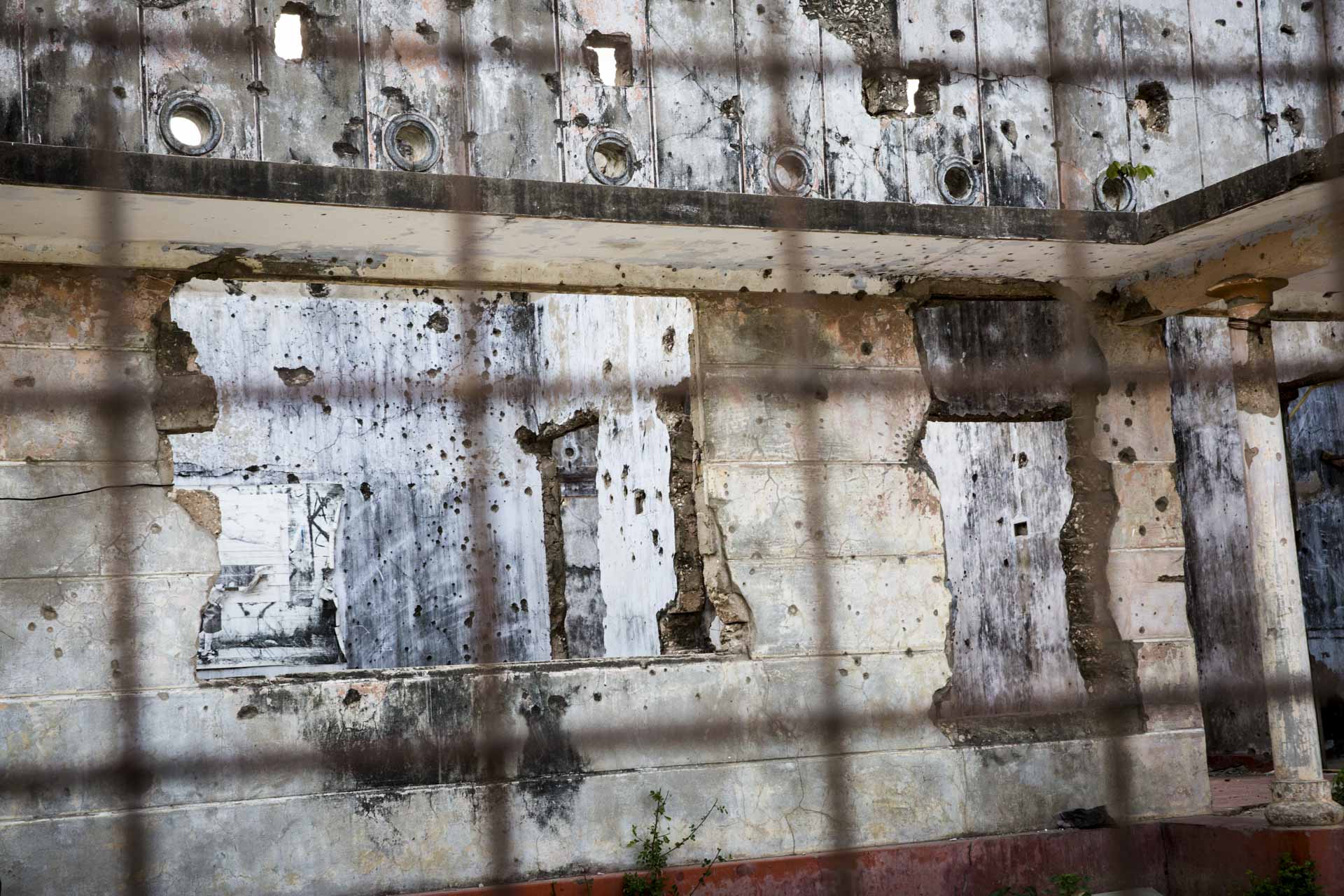 The hardship expressed on Jaffna’s behind-the-scenes faces was replaced by something entirely different on Karaitivu, one of a collection of small islands connected to the mainland by a long concrete causeway. Men and women sat outside their homes chatting, kids played, birds chattered. Everyone seemed to be smiling, waving us onto their island, an ocean-rimmed refuge packed with palm trees. We ate a sugary breakfast at a small corner shop, admiring the elderly man who popped in to monologue to a small but enthused audience before pushing off again, kikoi flapping in the breeze. 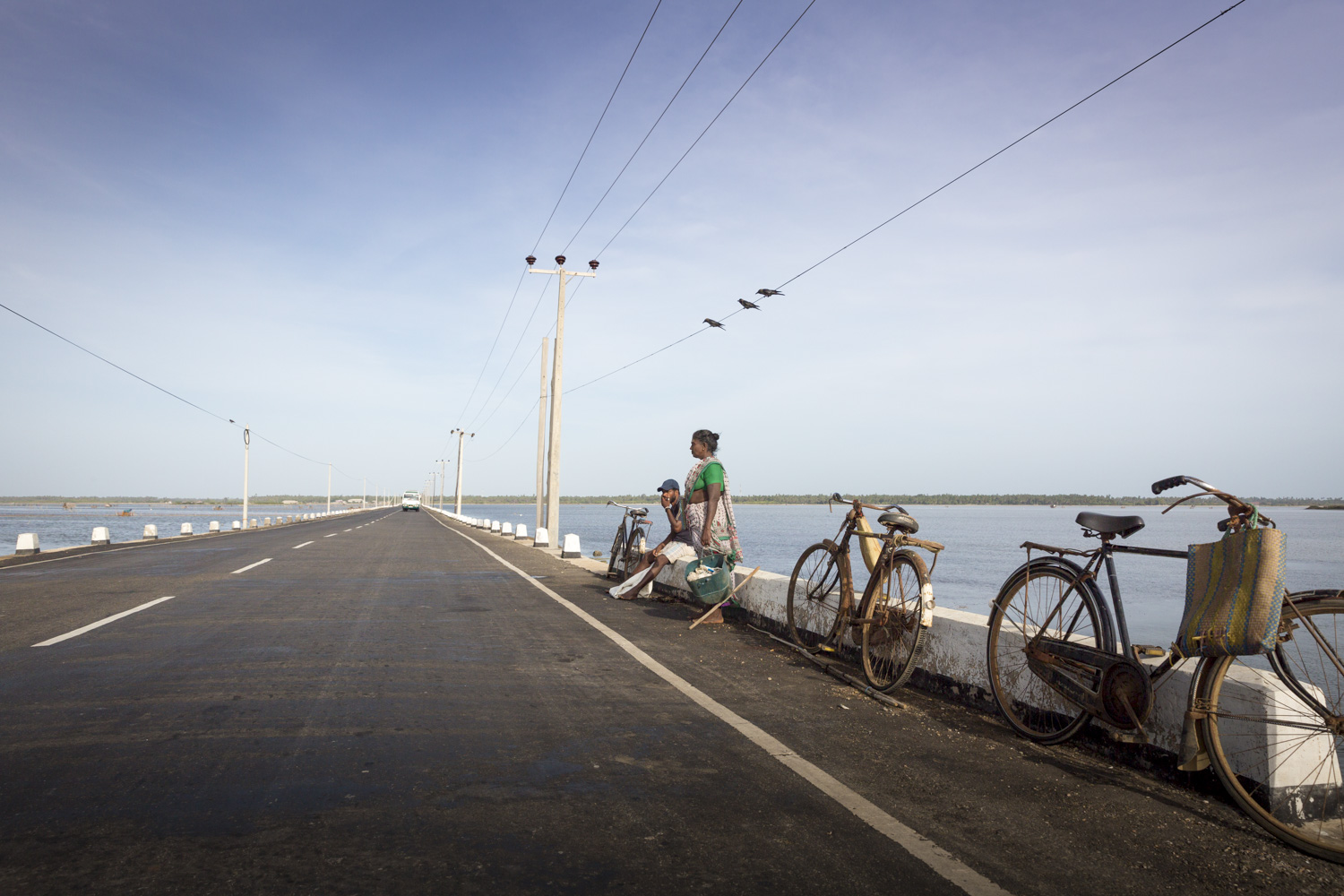 Stopping to check directions we found ourselves on the doorstep of an unassuming photographic studio. A girl no older than twelve greeted us with a smiling nod and beckoned us into the studio, a small but professional setup with two soft boxes and a choice of two backgrounds. Quickly cottoning onto my desire to take photos rather than be photographed, the studio’s young manager grabbed her little sister and stood in front of the painted balcony scene, amidst neatly potted daisies and bright green ferns. I took a few shots, after which the budding photographer showed us her work. There was a set of portraits waiting to be collected, images of a young boy framed in pink flowers, perfectly lit, professionally graded. As if to say “okay, that’s enough, I have work to do”, she returned promptly to her desk, shooing us away with an all-business stare.

We eventually reached the beach, the midday sun now blazing, cows chomping on whatever they could find (including a cardboard box). A big family waded in the calm shallows of the bay, woman wearing bathing dresses, elasticated just above the breast and falling in a straight line to the ground. This is the only time one really sees a woman’s collar bones, shoulders and back on such full display. Once wet, the soft cotton clings to every curve from the waist down to the calf muscles. They are worn not only to swim but to shower, as many of the wash facilities are public or shared, a celebration of the female form and the everyday act of cleansing. 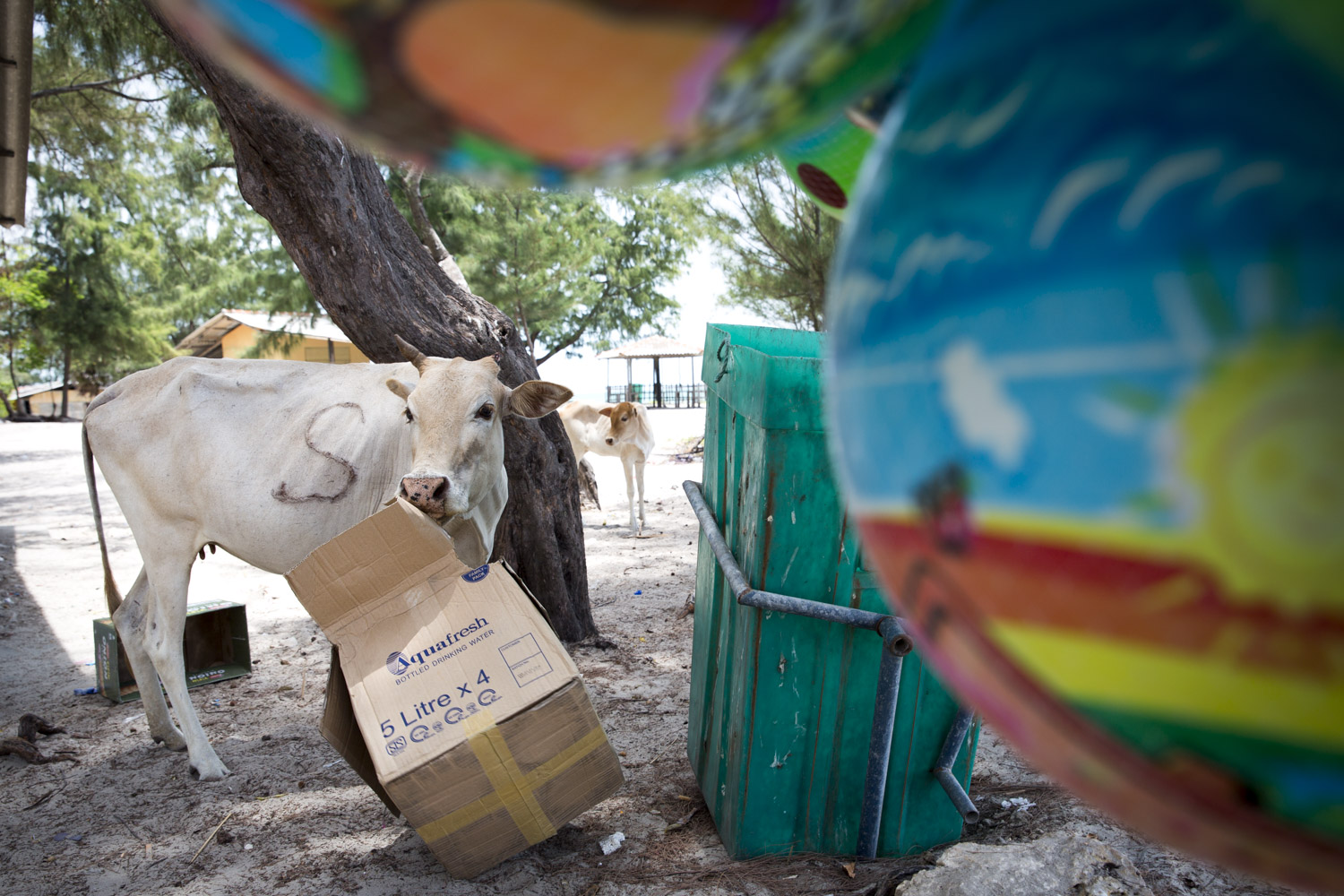 We left Karaitivu with salty skin, sweaty pits and relaxed faces, ready but not ready to bid Jaffna farewell. I’ll come back, I thought, nuzzled into Oli’s neck on the scooter ride home. Perhaps this is what photojournalism is – not a static overview of the things we might know, but a deepening appreciation for the things we have yet to learn. 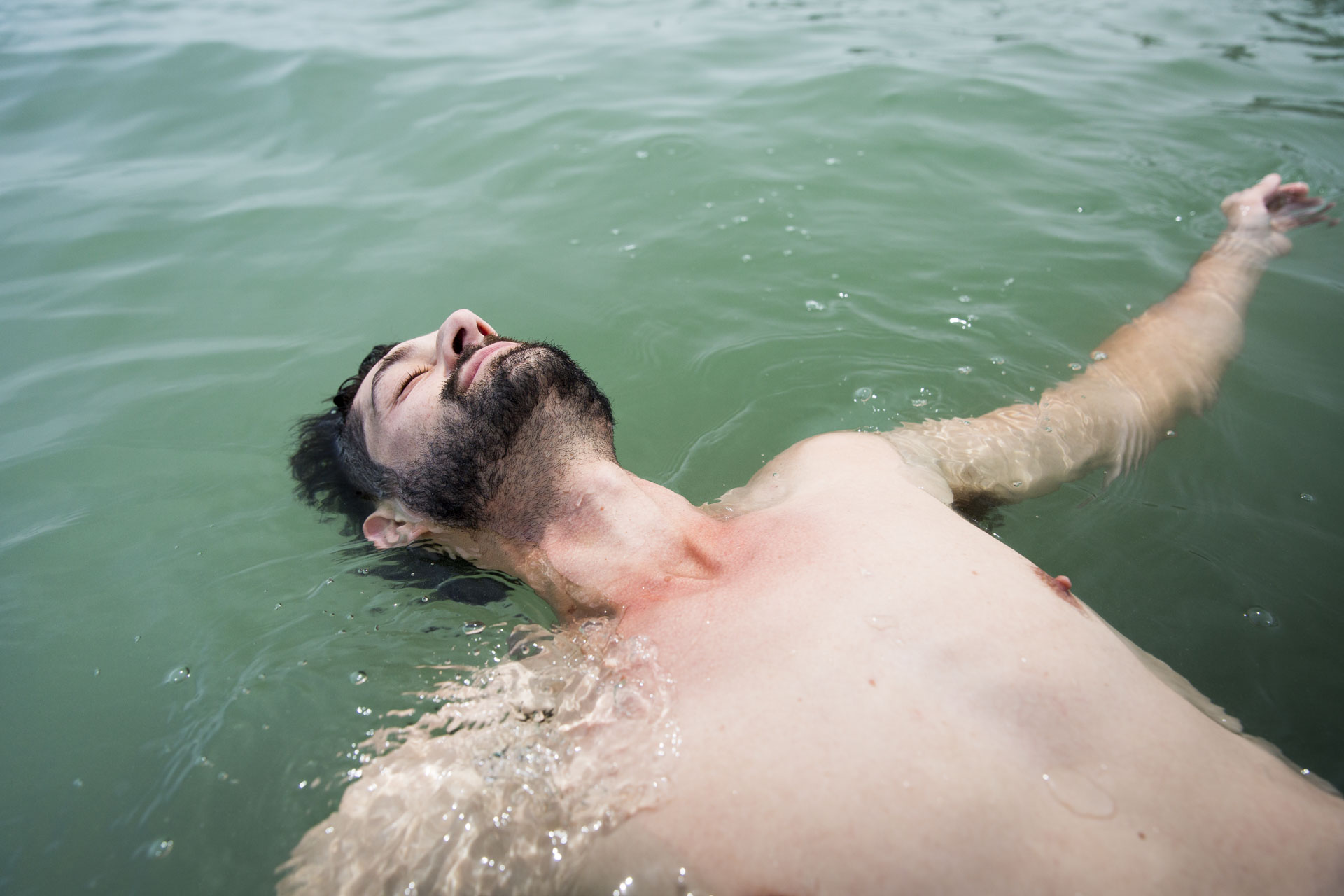