Tips: Wake up early (sunrise), go to bed late & rest in between; you don’t need an activities plan – Varanasi is a city in which to wander & wonder; try the (legal) hashish; get a room with AC; don’t get paranoid about Delhi Belly, just be sensible (wash hands, drink bottled water, eat fruit you can peal, stick to veg curry); sit on street corners and ghats; people watch; mind the livestock; give yourself time to adjust.

Transport: Catch a cheap internal flight from Mumbai or Delhi; no need to book too far in advance but do get to the airport early – security checks in India are painstakingly thorough

We woke up slowly on our first morning in Varanasi, not yet sure of our surroundings, acutely aware of how different India is to Sri Lanka, how much more. More sites, more sounds, more smells, more tastes. At first all this more was debilitating. I couldn’t focus my eyes on anything, my mind raced, my body battled between lethargy and restlessness. Everything and everyone moved so quickly, and although there was so much to photograph, my camera felt like a burden, too slow to capture the pace and energy of my fierce new surroundings. 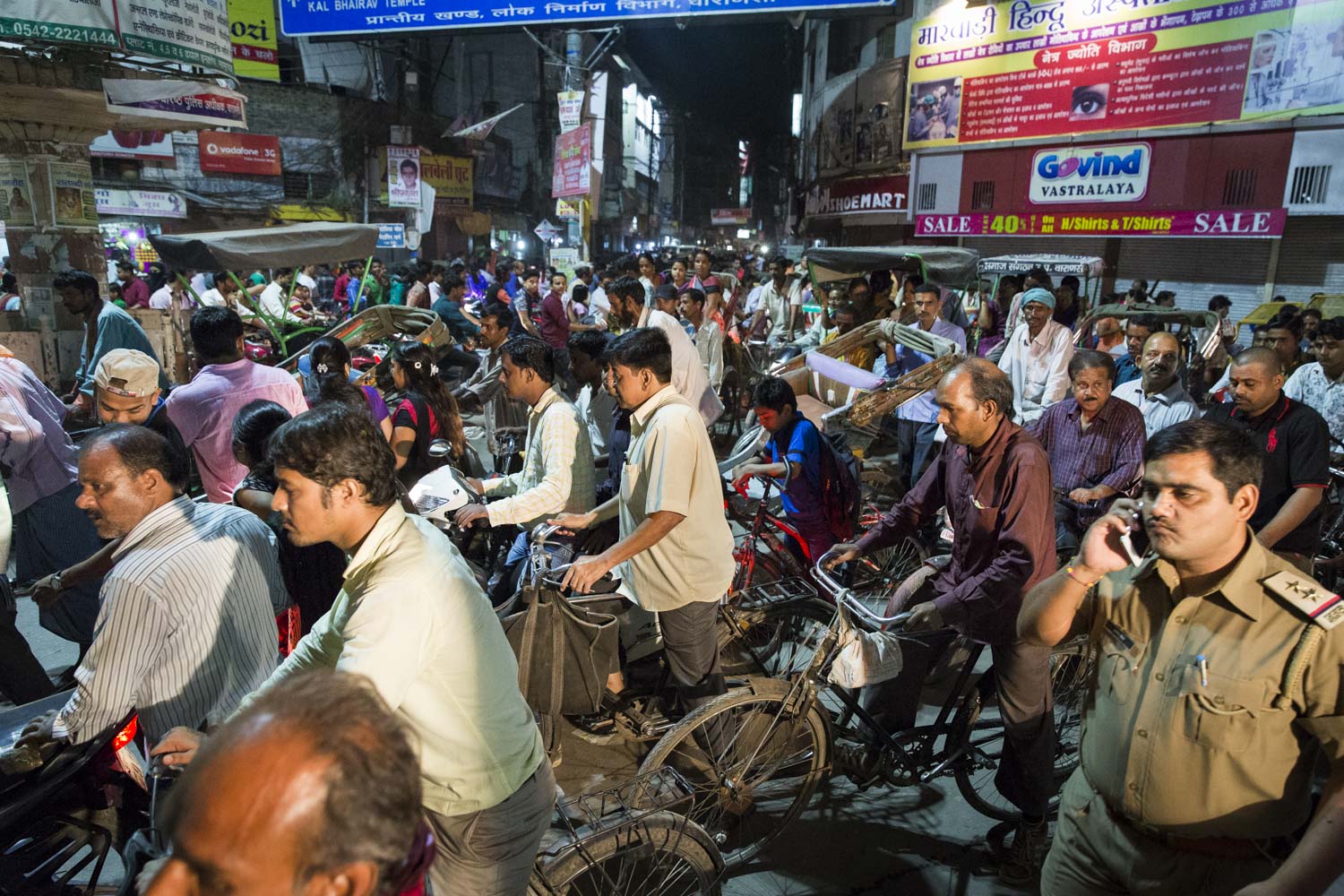 The cows brought me down to earth, calm and slow and seemingly unperturbed by the surrounding chaos. They wonder freely in Varanasi, idling between multiple lanes of disorganised traffic, standing still at busy intersections and even curling up to sleep, rendering precious surface area unusable. No one shoos the quiet beasts away but moves around them, creating rotund focus points where your eyes can momentarily rest. 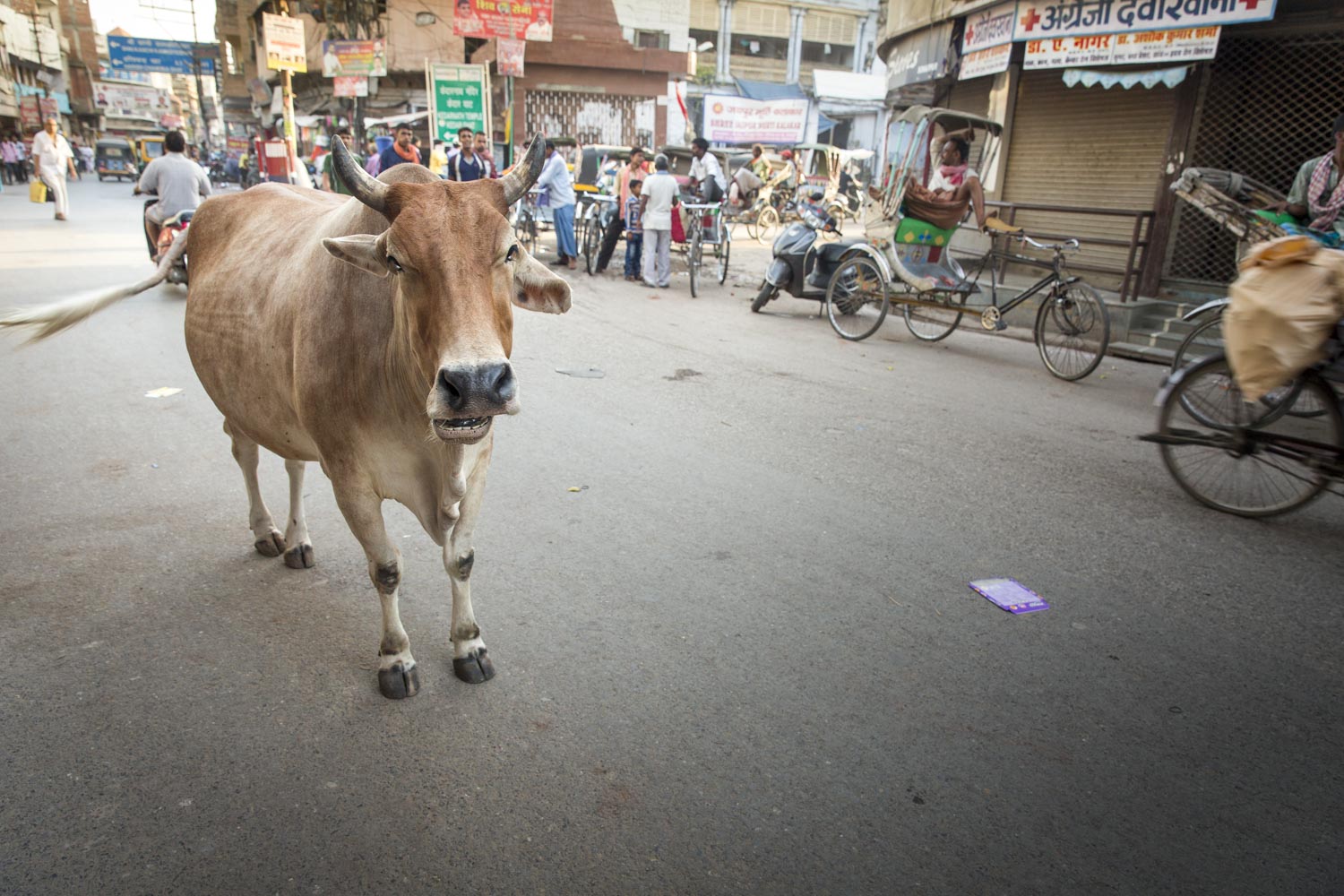 After an afternoon photographing cows and getting no further than the main street, we decided to sign up for an evening boat cruise. I’m not a huge fan of group tours but in our overwhelmed stupor we needed some guidance. The group was ten or twelve strong, led by a cocksure young guide who answered every question with “just wait, I will get there”. This infuriated me to no end, compounded by his insistence that everyone look at him when he spoke. Nevertheless I listened to everything he said, eyes straying in quiet rebellion, learning what I could about Hinduism’s holiest city. 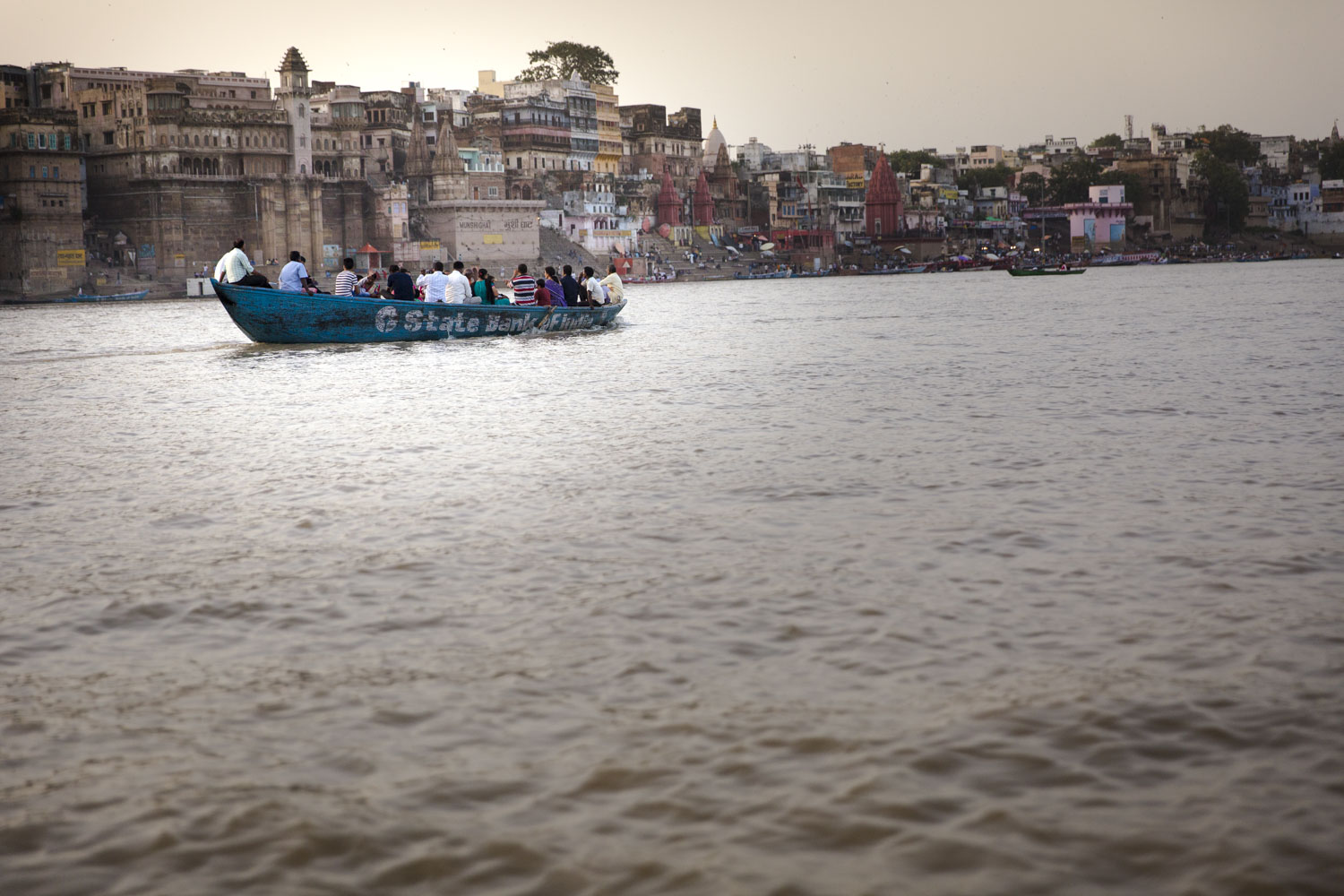 Varanasi is dedicated to the Hindu Lord Shiva, the omniscient God of Destruction, and it is believed that the souls of those who die here are released from the cycle of death and rebirth, gaining immediate access to moksha, or liberation. Eldest sons travel from all over India to scatter their parents’ ashes in Varanasi and those who die there are burned on public pyres at Manikarnika, the chief burning ghat on the Ganga’s northern bank. For those who cannot afford a traditional ceremony (the wood, man power and special oils that go into a traditional burning are too expensive for many), there is a crematorium on the southern bank, much like those at home, that doesn’t charge. There is always a body, or more, burning at both the northern and southern ghats, around 50 a day in summer and up to 150 in winter, so that death becomes part of everyday life, as out in the open as everything else. 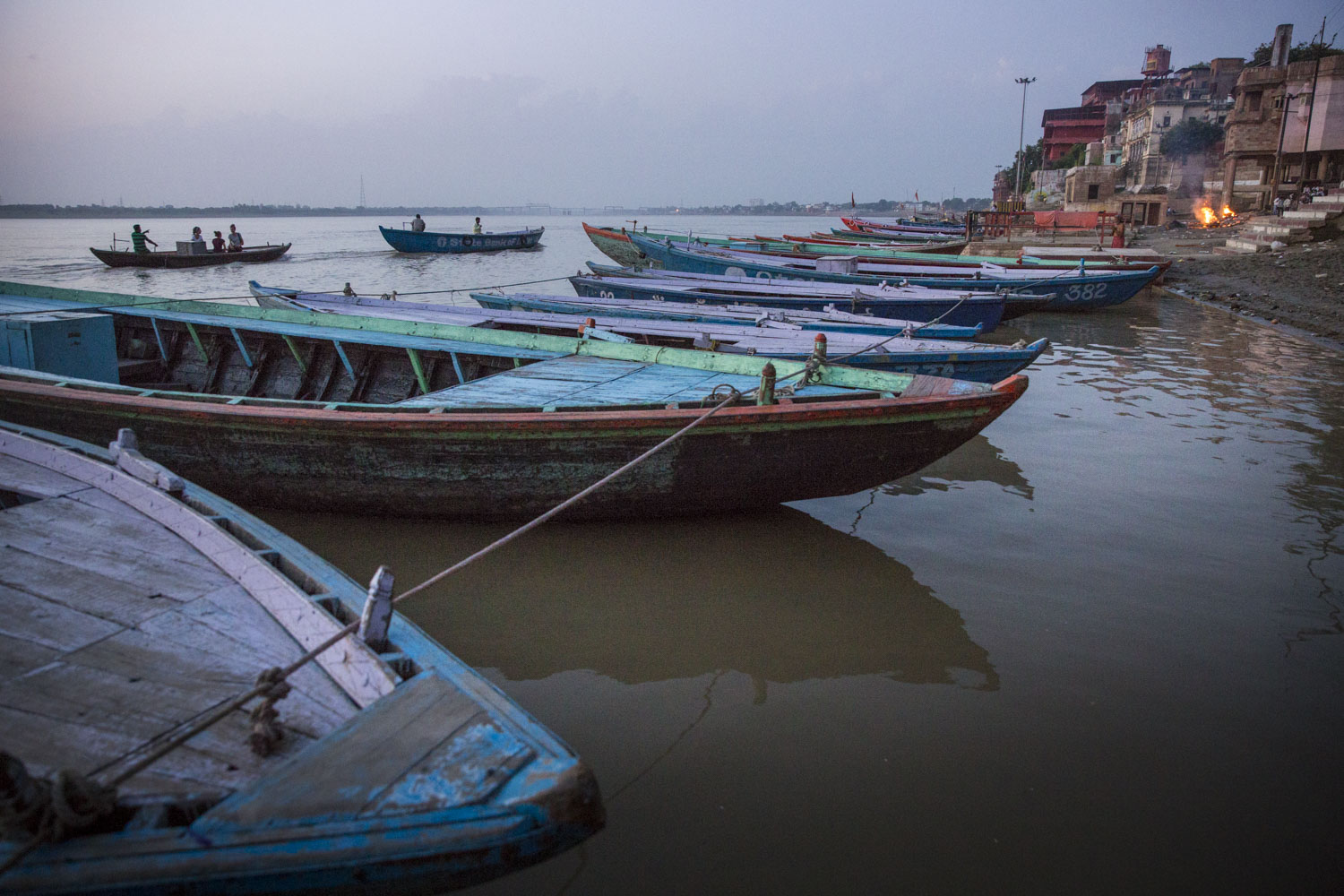 Everyday we saw processions on the road – groups of men carrying their dead on a wooden stretcher, the body wrapped in saris and adorned with flowers. Once there was no procession, just a solitary man carrying a cotton-swaddled child, much harder to stomache than the ghats’ burning bodies. It was only on day three that we sat at the ghat and watched a cremation, a woman we guessed, with dainty feet that protruded out of her silk wrap. We watched her toes curl and skin change form as her eldest mail relative manned the fire, her guardian for departure it seemed, dressed in crisp clean white, head and beard shaven. 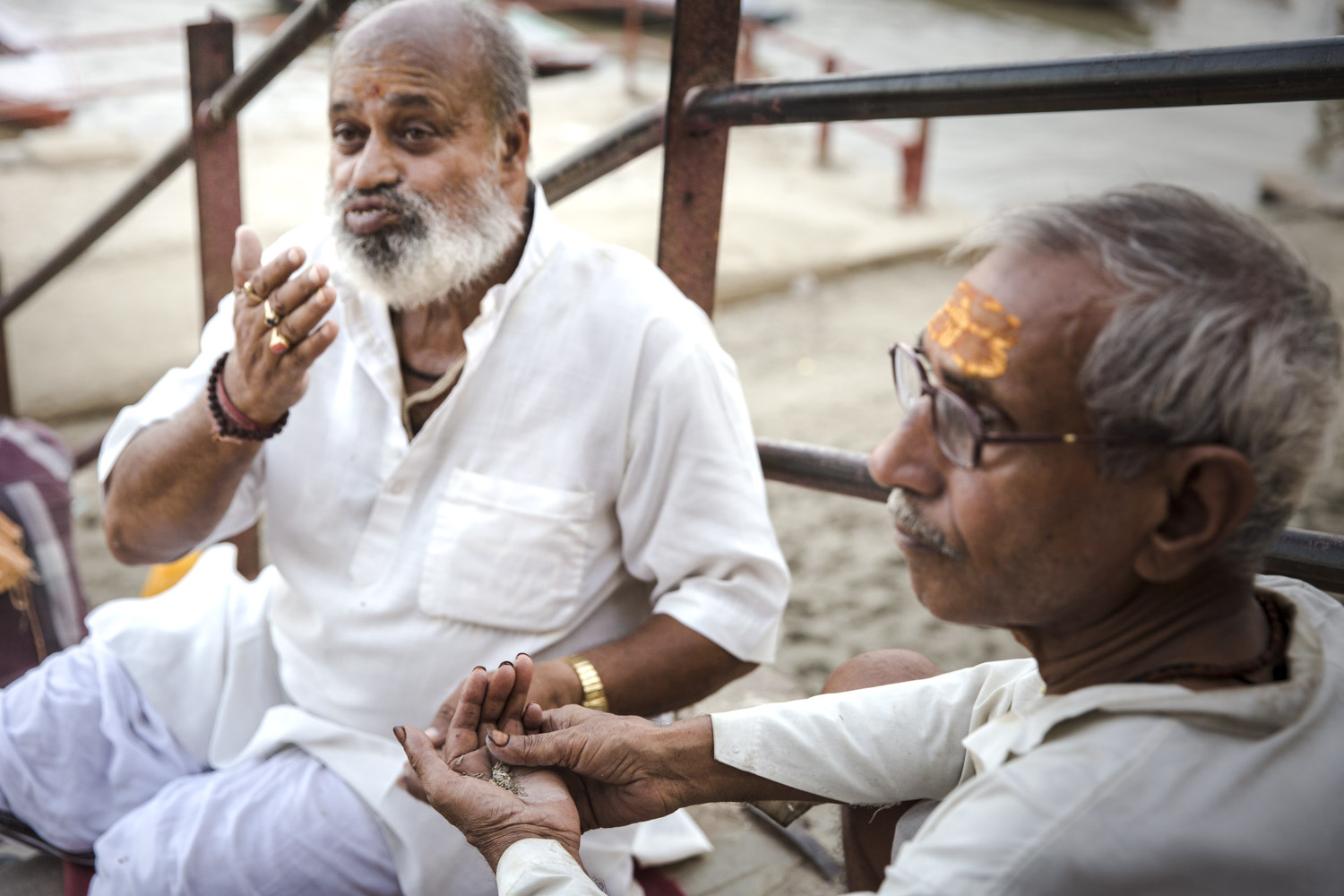 In any other context the scene might have been disturbing but in Varanasi death isn’t frightening. Its both ordinary and celebrated, just like life. No more that ten meters from the burning pyre, young boys flew their kites, and just a little further on they swam, diving into the Ganges with no fear of what it might hold. Men fished, cows bathed, elders chatted, holy men prayed. Alongside death, life on the ghats continues as usual.

The burning ghats are just two of eighty-seven in Varanasi, sets of stairs that lead elegantly down to the Ganges, long enough to accommodate the water’s inevitable rise and fall. No architectural attempts have been made to push the water back, or restrict it any way. Ma (Mother) Ganga is considered godly, providing healing comfort to those who are sick and purity to those who seek it. The ghats are a means of reaching God, in death and in life. 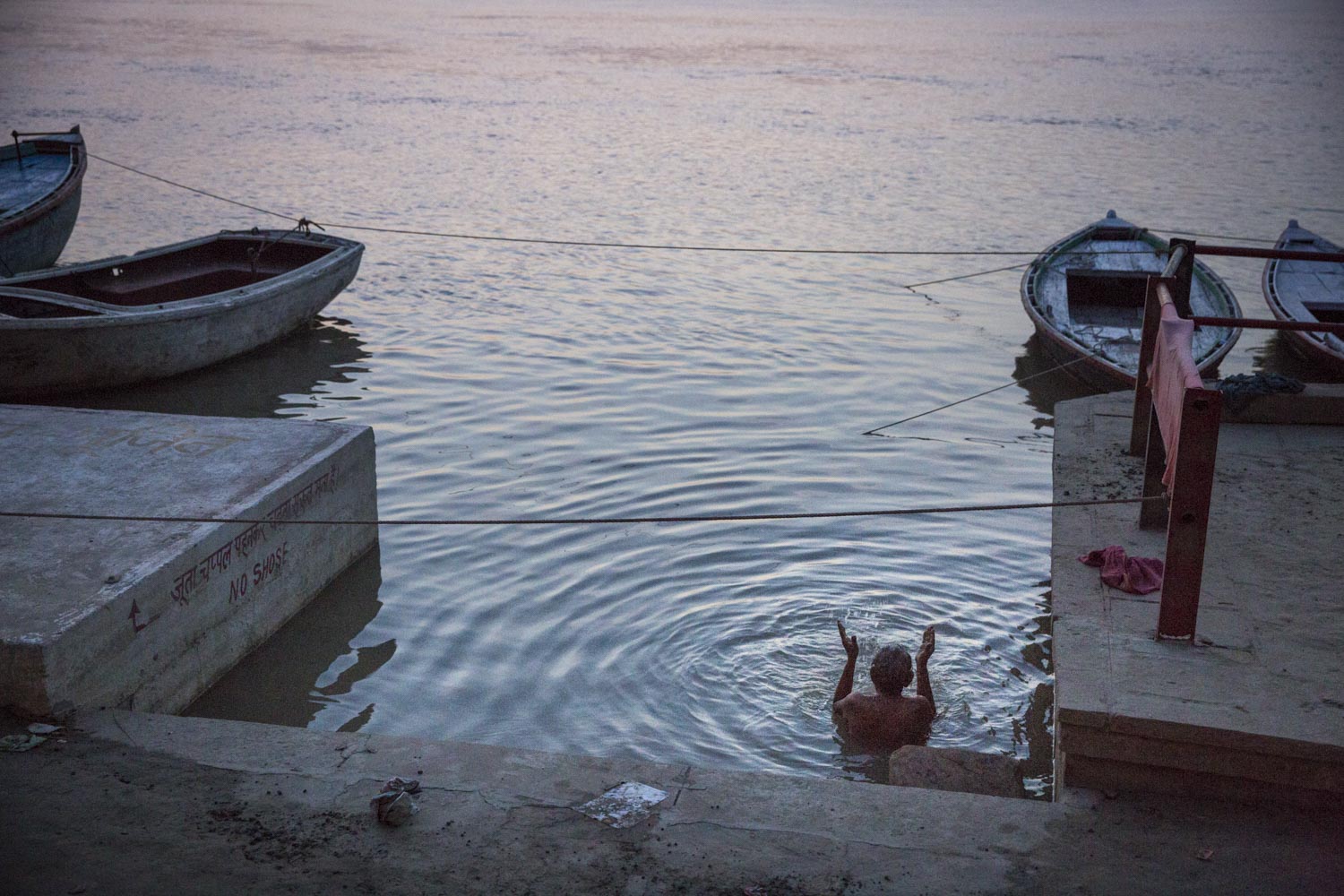 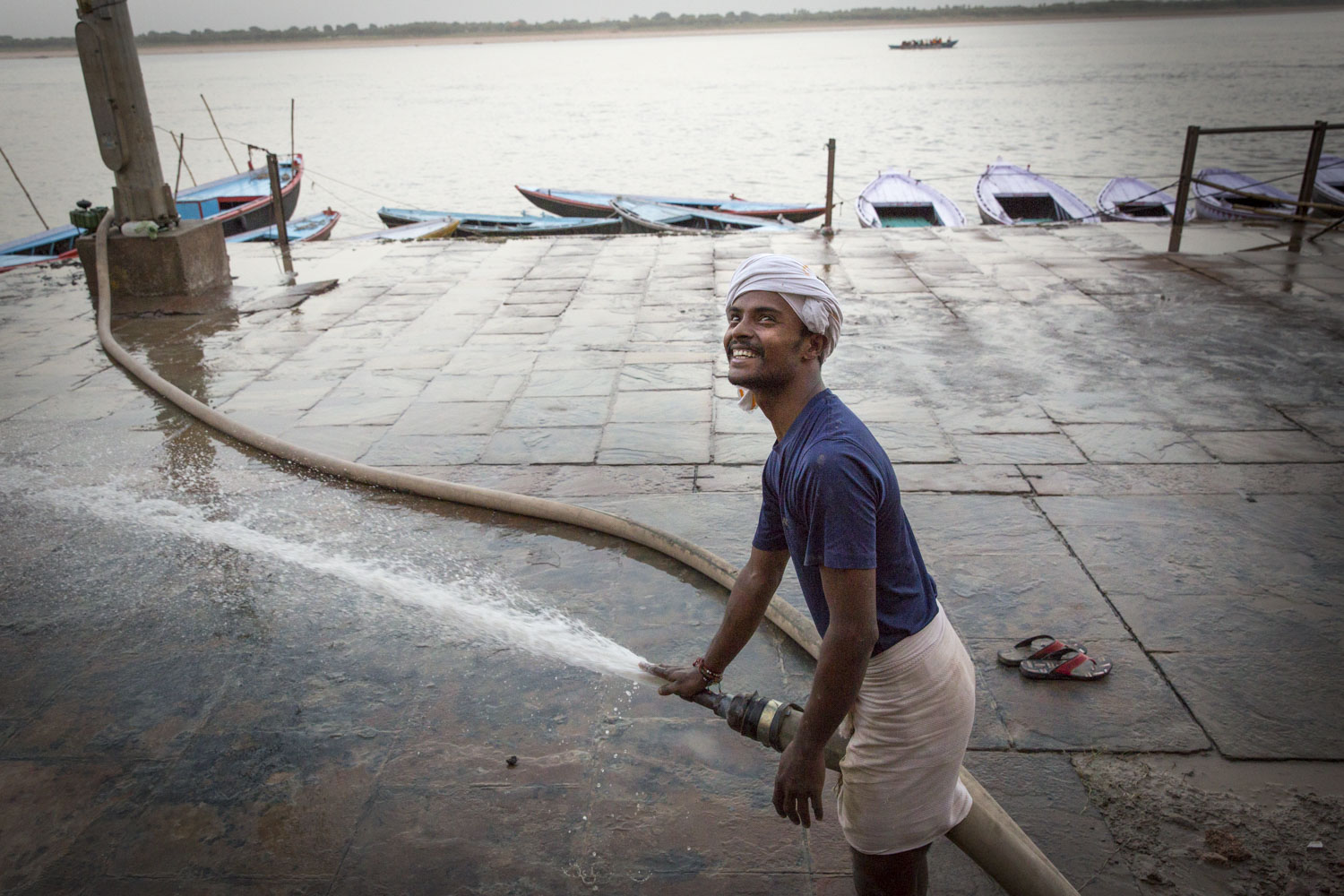 We spent every evening walking the ghats, sometimes from the southern to the northern end, others just settling at one, watching the dark unfold. One afternoon we came across Surendra, a beautiful young man in a light knee-length lungi, cream turban and dark blue shirt, cleaning one of the ghats with a thick pipe that led into the Ganges. “Why are you cleaning the ghat?” Oli asked, a little surprised I imagine, given the surrounding scene of mud and litter. “This is India,” he replied with a matter of fact grin, “we clean everything”. Surendra, with his disarming smile, handsome face and sincere manner, was not only convincing but right. In India cleanliness is of utmost importance. On the streets there is litter everywhere and the odour of raw sewerage is hard to avoid but you’re unlikely to see a stained sari or smell any body odour beyond your own. Shoes are left outside, patios are repeatedly broomed, long hair is washed and sweetly scented, hands are clean, clothes, faces and bodies scrubbed.

The idiom cleanliness is next to godliness rings particularly true all along Varanasi’s Ganges. One morning we made our way down to the river for sunrise where a crowd of men and women had already gathered to bathe, pray and exchange news. The light was soft, the sun not yet risen. Men and women bathed side by side, most in small pockets, with a few wondering a little further out into the cool waters, hands lifted in prayer or lighting small candles that floated with the current. I was surprised by the complete absence of shyness. The bathing women were clothed, their saris like bright ink stains on the water’s surface, but appeared perfectly comfortable flashing bare skin as they dried and changed. Each woman had her own way of getting dressed, her own way of putting on the short sleeved crop top with beads running down the back, of draping the endless fabric, of flicking the excess over her shoulder. Remembering my own clumsy attempts at wrapping a sari, I was enamoured by the confidence and ease with which these women did it, chatting as they went, eyes never darting as mine would trying to change in public. I felt a wonderful sense of comfort watching this morning ritual unfold, so different from home where privacy and lonesomeness go hand in hand.

Although its easy to appreciate Ma Ganga’s majesty, we were too timid to actually go in. Bodies considered  sacred – children under ten, anyone dying of a snake bit, sufferers of leprosy, pregnant women and holy men – are not cremated but weighed down and sent to the Ganges floor. That I didn’t mind too much but the dead livestock, human waste, litter and effluent my mind and immune system were not quite ready for. The only time I ventured into the water was when I slipped in a stream of raw sewerage, arms flailing to protect my camera, face left defenceless and subsequently soiled. “That is no good,” a passing local warned, “you need to clean yourself”, which is all I needed to run to the water’s edge. Oli, kind as ever, offered his t-shirt to clean my camera and showered me in air kisses on the rickshaw ride home, carefully avoiding my shit-splattered face. “Nothing like a romantic stroll on the ghats to finish off the day,” he cooed through grinning teeth. All said and done, it was pretty romantic.

One evening we came across the virgin voyage of a narrow wooden boat, not yet bearing the ubiquitous Bank of India logo. The men, led by an elder with Brad Pitt abs, hopped on first and immediately the boat started to sink. Four of the younger men started bailing water and after five chaotic minutes they returned to the ghat, a sign I assumed that the joyride was over. Far from it! Next it was the women’s turn. About ten climbed on, immaculately dressed, hair neatly pinned, and the process repeated itself, the women’ shrieks only adding to the sense of occasion. When the ladies stepped off, saris half-soaked, the youngsters hopped on, whooping and laughing, paddling and scooping. If those buckets had ever stopped scooping, even for a second, that poor vessel would most certainly have sunk and yet no one showed any sign of dismay or upset. The scene unfolded with infectious joy, and when it was over a bowl of chickpeas emerged, shared amongst everyone, including us. “Its an analogy for India,” Oli said grinning, “Things may not work, in fact they might be fucked, but that’s no reason to stop celebrating”. 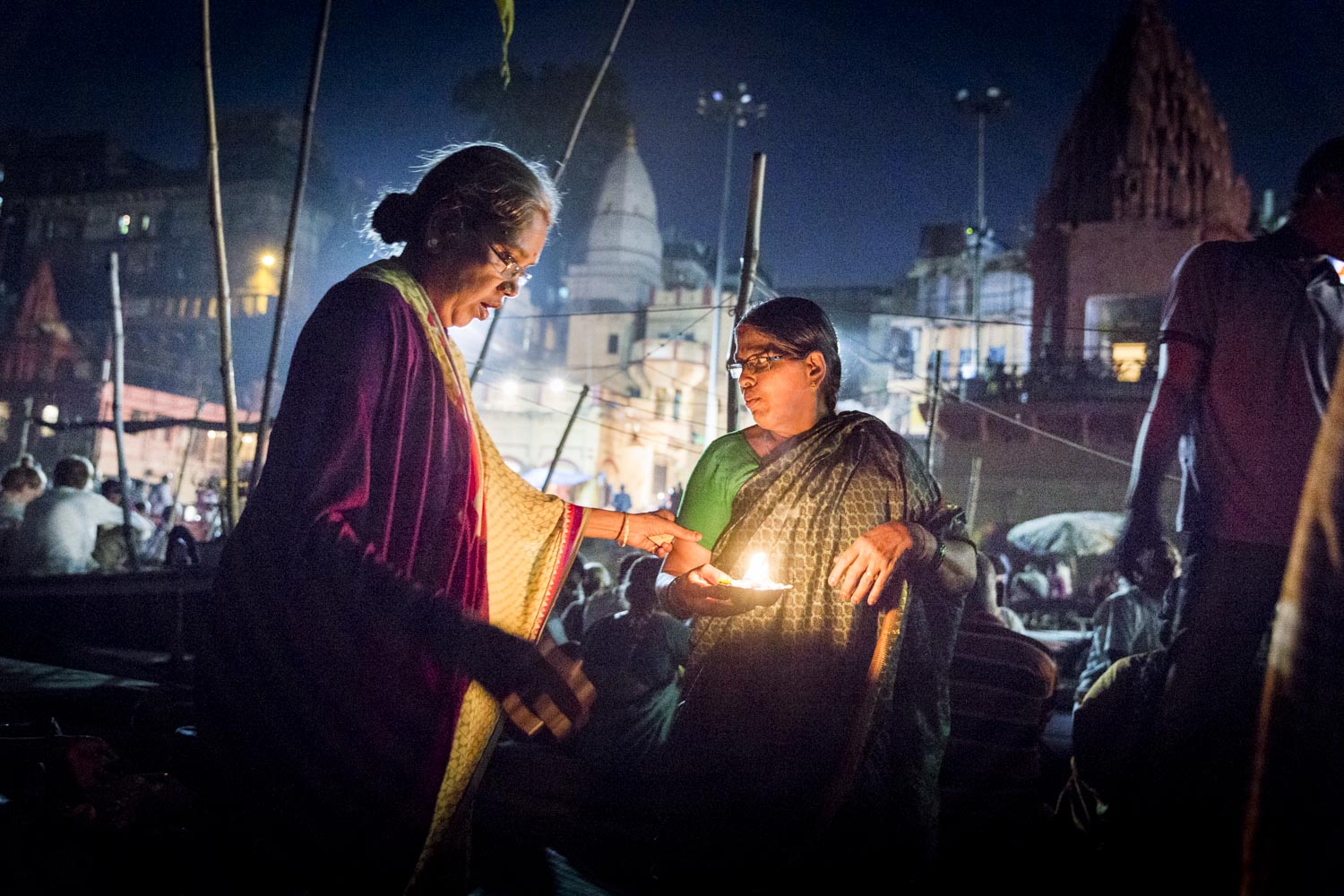 Vishal, our guesthouse owner in Jodhpur, echoed Oli’s sentiment. “Faith orders life in India. It doesn’t matter what God you worship, as long as you have something to honour and celebrate”. There are some 200 official festival days in India and none pass by without music, crowds, processions and fanfare. In Varanasi celebration isn’t restricted to official dates. Every night thousands gather along the Ganges, sandwiched on the ghat stairs or on boats so closely packed that you could hop from one to the next, and at 7pm the ceremony kicks off. We were introduced to this incredible custom with the celebration of Lord Krishna’s 5242nd birthday. Five regal men were the centre of attention, wrapped in raw orange silk, foreheads dotted, arms bangled in gold, playing copper castanets as they circled incense in a synchronised pattern. All around them piles of incense burned, shrouding the crowd in travelling plumes of sweet-smelling smoke. Varanasi’s architecture cradled the scene – ornate oriental archways, red brick facades covered in creepers and cylindrical towers with whipped-cream peaks. It was all so beautifully strange, like nothing I knew or had seen before. From the overall picture to the tiniest detail, I couldn’t compartmentalise anything and soon stopped trying. 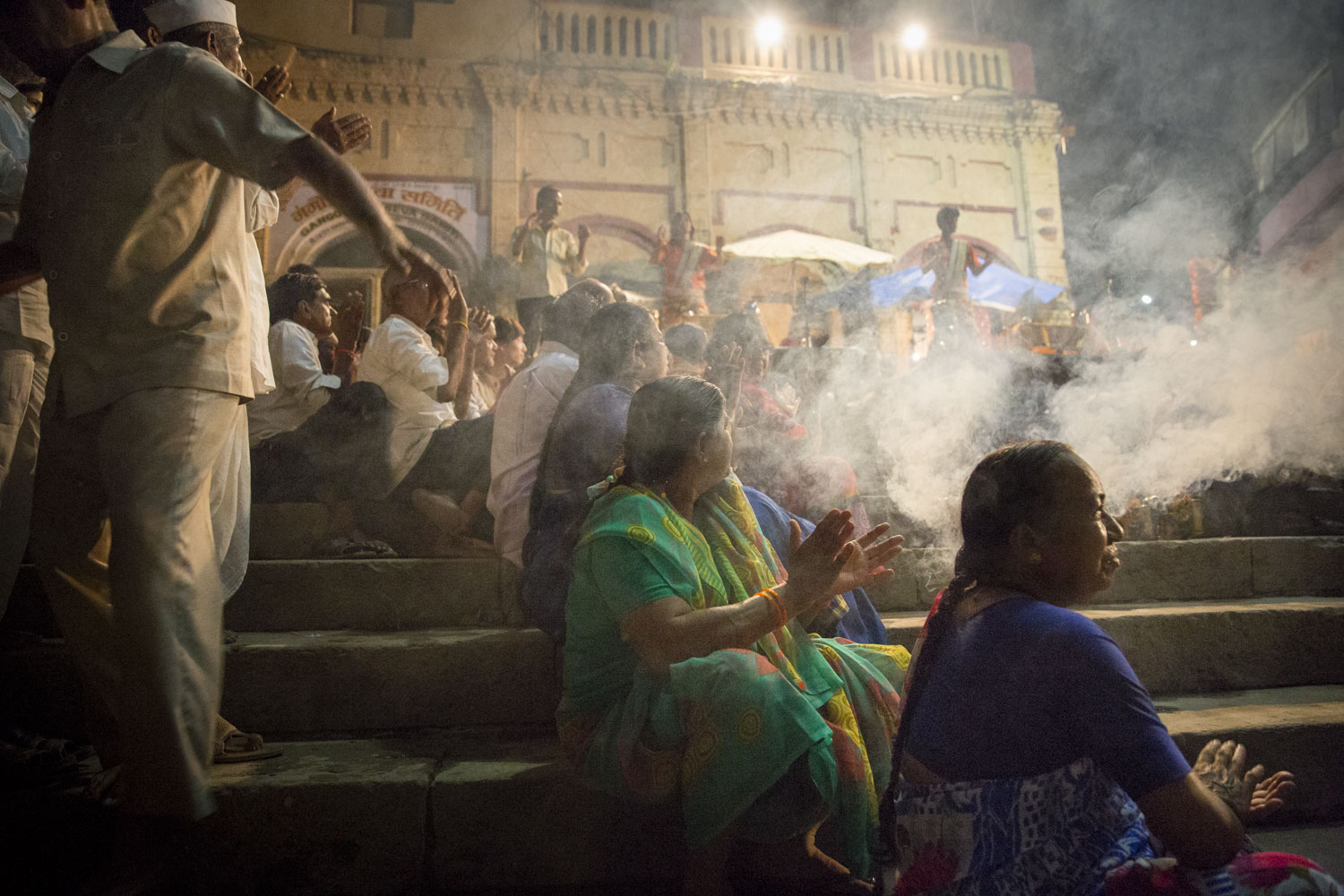 This is how Varanasi played out for us –  a series of stupefying moments clumped together in the morning and evening and in between we rested, drinking chai or sitting on a shaded pavement watching the saris swish by. Some things, like the traffic, we got the hang of, learning not to look (for there is always something coming) but stepping straight in and joining the flow.  But for the most part everyday Varanasi continued to leave us dumfounded. The tiny man selling cigarettes, knees tucked effortlessly under his chin as if his legs inhabited no space at all; the sanctuary of a bindi shop, only three steps wide; women on scooters, faces wrapped in pink to filter exhaust fumes; bejewelled bare feet and light green eyes; elaborate temples and hole-in-the-wall shrines; stoic bulls and sturdy street dogs; bodies burning while kids fly kites; nonstop motion but time to drink tea.